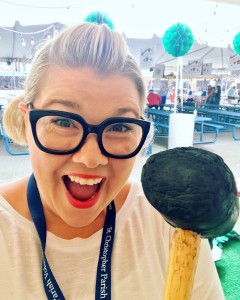 Look at me now!

One month into the year long Project Healthy Body, and the results are good – but they could be better. The first month kicked my ass with a 28 day autoimmune protocol / elimination diet.

I don’t want to diminish the progress I made, because did lose both weight and inches. I lost the weight I gained back during the break between sessions, plus one additional pound and I lost another 4.5 inches.  But although I made progress, the AIP really took the wind out of my sails.  The good news, however, is that this is a life-long journey with peaks and valleys – not an all-or-nothing sprint to the finish line. It is trial and success, and it is trial and error. I am learning what works well for me and my body, and what doesn’t.

Most notably, I learned that the script matters to me. At least for now. For the first four months, I operated on the notion that I was a healthy person who could eat whatever she wanted – I just chose healthy foods that supported my vitality. Simply thinking abut food in a different way made all of the difference for me. Instead of feeling restricted and leaning on my own shaky will power, I felt empowered.  And that empowerment led to making good choices again and again. Just knowing that I could have the pizza, or the pasta, or the burger if I wanted it, magically made me not want it. It freed me from the handcuffs of restriction and opened my mind up to fill my home and my body with fresh and colorful whole foods.

The benefits of an autoimmune protocol are not lost on me. It is made for me.  I have two autoimmune disorders: hashimotos, and vitiligo. It is highly likely, if not an absolute certainty that I am reactive to nightshade vegetables and other common food sensitivities. Committing to discovering what exactly works best for my body can only improve my health. Moreover, many of the women in the group were getting amazing results, which I also wanted.  And yet….

It seemed the harder I tried, the more I failed. And my failures were with foods that on any other day would be perfectly healthy. Foods like a little hummus with my raw vegetables, a sliced red pepper on my salad, or a little almond milk in my morning smoothie, instead of the AIP friendly coconut milk. Each time I caved and introduced one of these restricted foods, I felt the familiar sting of shame and anger.  Shame that I couldn’t stick to the protocol 100% for more than one week (maybe it was less).  Angry that I was berating myself for having a god damned red pepper! And stunned that after so many months of feeling like an A student, I was suddenly feeling like I was on a performance improvement plan. I was confused and should have reached out for help, but the competitor in me, plus the good student status I had self appointed urged me to try and figure it out on my own. Get back up and start again, I told myself. No more shitty red peppers!

The month-long endeavor was not without significant wins and powerful lessons, though. I zipped up (without too much effort) my all-time favorite pink strapless dress. I haven’t been able to zip that beauty up for over seven years. My wedding rings suddenly slip on and off of my finger without effort, and even my undergarments are getting too big!  I also did another clothing purge and purchased new jeans (size 18) and three new bras – and not because my ginormous jugs eventually put so much strain on the fabric that the underwire popped out (which has typically been the case).  In fact, I once made small talk with a particularly notable silicon valley CEO – while, unbeknownst to me, the unearthed underwire of my bra began travelling through the fiber of my sweater until it landed in it’s final resting place just under my chin.  Nay, this time, I needed new bras because the circumference of my chest was smaller than the smallest rungs on the clasp. If this is not monumental success, I don’t know what is!

In addition to these positive changes, I also slept more, read more, and spent more time just being. My husband and I spent less time watching TV and more time holding hands by the firepit. I woke up and read to Craig every morning, and I made our bed before I left for work. We also increased our physical intimacy, which is good because that has been an issue we have struggled to get back on track. I mean, when you can’t eat anything, you might as well get it on, right? Honestly, this counts as a double win because not only were we having sex, but we were having SOBER sex!!  Holy hell – talk about uncharted territory! Short, shameful confession…we almost named our second child Martini, if that gives you any insight into how we sexy-time. At first it was a little awkward, and at one point we even bonked heads which made me laugh at an especially climactic moment that gets ruined by laughter. But even though it was a bit of a circus at times, it helped us reconnect. And that alone is worth one month of struggle.

So what’s next?  Well, I am going to give the protocol a break and go back to flipping the script again. I am going to be more disciplined about portion sizes, and keeping dairy and grains to special occasions only.  I can’t afford to slip into my old habits, or take my foot off the gas – because although I have been doing well and I have never felt more proud of myself, I need to be doing better and pushing myself harder.  I still have 65 pounds to lose before I am no longer obese. I need to charge forward and be more comfortable with a little discomfort. Especially when the discomfort equals better health and longevity.  The stakes have never been higher, and I need to remind myself of that. Because failure means death.  And as horrible as it feels to type that, it is the truth.  My children deserve better, and so does my husband – but most importantly, I am going to do this for me. The gift of self love and a longer life from me, to me.

I am a healthy person and can eat whatever I want, but I choose to consume whole and healthy foods which support my vitality. I value good sleep, intense spin classes with music that makes me feel like I’m dancing instead of biking, and bonking heads with my hunk of a husband. I strive for true intimacy and connection with my family over charmed but fleeting moments with strangers. I choose a slower and more purposeful pace over the fake allure of being perpetually busy. And I seek progress over perfection. These are the habits and values that, over time, will get me to my goal of being my true authentic and happy healthy self.

One thought on “When to protocol it quits”